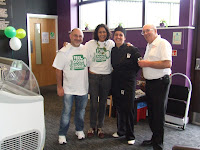 Another week's flown by and we find ourself approaching October - already! The World's Biggest Coffee Morning was a great success - we went out to visit several in the dales, doing live inserts into Steve Joy's show from a couple, starting on the Grove in Ilkley. From there we moved on to the Lawn Tennis Club (also in Ilkley) which was very busy indeed. We also visited Embsay Village Hall, where we learnt the rudiments  of Carpet Bowls, Bolton Abbey Village Hall (which was packed!) and on to Barnoldswick. There we caught up with Tricia and Beryl of the Calendar Girls at Rolls Royce Leisure, and from there we went into the town centre. 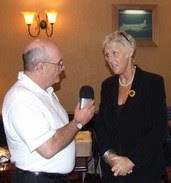 Sadly we missed the event at Victoria's Needles, and in fact that had to be the end of our tour, time having caught up with us. We had planned to go much further - up to Ingleton in fact, but our three hours alloted time sped by far too quickly. We also missed out on a planned trip to Craven College, assuming that the event would be at the Aireville campus. When we arrived there we were told it was at their High Street site, so we reluctantly made the decision to give it a miss, it being Market Day. We hear It was a great event though, and congratulations must go to all who put in such a fantastic effort. 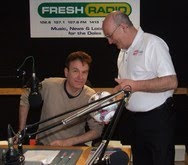 In the morning we'd kicked off an on-air auction of a football, signed by all the players at Burnley FC. I'd hoped we could raise around £50, but in the event Steve Joy managed to double that, with some frantic last minute bids coming in to his show just before mid-day. That will go into the Rolls Royce total, the ball having been donated to Martin Holden, who organised the event there with Catherine Oldfield. Martin had been into Fresh and came onto the Breakfast Show last Wednesday to tell us all about his experience of MacMillan when his late wife sadly and very recently succumbed to cancer. I'm not sure what Roohi Lupton from MacMillan is going to spring on us next, but I think I can speak for the whole fresh team when I say were proud to have been able to be a part of the World's Biggest Coffee Morning!

Top: We gather at the Tennis Club in Ilkley. Ian Wighton (who used to do the Motown and Soul Show in the Yorkshire Dales Radio days) was drafted in to help out on the day.

Middle: I catch up with Tricia Stewart of the Calendar Girls at Rolls Royce Leisure.

Bottom: Steve Joy and I discuss how much we reckon the Burnley Football will fetch.