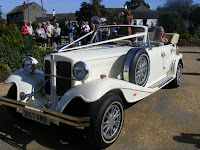 You could be forgiven for thinking that a wedding held over the anvil at Gretna Green's celebrated blacksmiths might be a little twee, or even tacky - but it couldn't be further from the truth!
We went up to Carlisle on Thursday night to prepare for the wedding of our friends John and Carolyn the following day. We all stayed at the Pinegrove Hotel on London Road on Thursday and Friday night, the ceremony taking place on Friday afternoon. There were so many guests travelling up to the occasion that a mini-coach was laid on which was probably just as well, given the popularity of the place. I took the brides parents to Gretna, following the fabulous white open-topped Bentley carrying Carolyn up the M6 to the ceremony. We were all ushered in, and shortly afterwards the bride-to-be was piped in to the tune Flower of Scotland. The registrar instantly put everyone at ease - and the ceremony itself was very moving indeed. 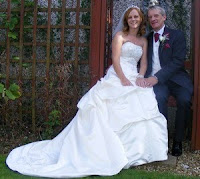 Following a photo-shoot outside the Blacksmiths Shop (which was shared by dozens of Japanese tourists!) we all went back to the Pinegrove hotel. On arrival we were ushered into the function room, which had been decorated to a standard usually only found in a glossy wedding magazine. There were gifts for all of the guests plus a glass of fizz to toast the happy couple. The food was simply delicious and was a credit to the chef - thoroughly enjoyed by all. After the speeches we were entertained  to a Casino Night by a team who'd travelled all the way up from Otley. I can honestly say I've never enjoyed a wedding quite as much, and it will be an incredibly hard act to follow. Just one small point - the entire event was planned and brought together by the happy couple themselves! (*Mood lighting by Ben Middleton)
Posted by James Wilson