(It's a song title!). I suspect we're going to be very grateful for our air-conditioned studios at Fresh HQ as Steve Joy calls it; I finished the news yesterday and then sped up to Grizedale Forest, while Julian braved the crowds at Otley Show.
Grizedale first, and we stopped off for a bite to eat at the Bridge service station near Newby Bridge. The car was parked in the shade of a hedge at the side of the car park, but when we got back in the outside temperature gauge read a massive 37 degrees! It settled down at 31 when we set off, but it was still sweltering. Up to Grizedale via a fantastically scenic route, courtesy of the Sat Nav, and a chat with Forest Ranger Dave Lowe, who told us of the many changes since we were last there. The Visitor Centre and Cafe are simply amazing - and hugely popular, as is the Go Ape adventure course and the mountain biking. Most business opportunities seem to be franchised, which is a great way for the Forestry Commission to help make up a funding shortfall. Sadly the only other option is to sell off parts of the estate, with the almost inevitable loss of access to the general public, and when you consider what a huge net contribution these forests make in terms of recreation, public fitness and even helping to lock in carbon, it just doesn't make sense NOT to protect them and keep them in public ownership.
From Grizedale we were going to make our way back home, but the road leading up to Dent via Kingsdale just looked too tantalising! When you come over the top to Deepdale the view is just breath-taking, especially on a day like yesterday. Thornton Lane is a gated road, going round the western and northern end of Whernside, one of the Three Peaks and ending up in Dentdale (not far from Dent Station) via Deepdale Lane. Then it was back up to Ribblehead, where it was too disappointingly hazy to take pictures, and back home via Settle.
All the way round we were able to listen to Julian at Otley Show, which sounded fantastic. He was able to make use of the very latest technology to not only broadcast from the show, but also take control of the playout system at the studio, something that just a few years ago would have been impossible. Hopefully it will mean we're able to do many more "outside broadcasts" throughout the summer at the various shows we'll be attending.
Right - a bit of show prep for tonight now - we're on the letter F in the Solid Gold Sunday ABC of Pop and Rock, and will be featuring (amongst many others) Fleetwood Mac, Foreigner and Frankie Goes to Hollywood.

Finished the news this morning and then made our way (via an extremely interesting route courtesy of the Sat Nav!) up to Cullingworth, for a day out at the 12th annual Bronte Vintage Gathering. I'd set the Sat Nav on Shortest Route; it came up with a warning, but OBVIOUSLY it didn't mean me - so I ignored it! On the plus side, I've seen places today that, despite having lived not more than 10-15 miles away, I can honestly say I've never seen before!

Made a few bob on the Sheep Racing, with magnificent commentary by Andrew Wood, wearing his YFC badge. The blue lamb, bringing up the rear, was obviously not that bothered about getting back to his mum any time soon. Immediately after taking this picture he turned back around and did a couple of circuits of the arena! 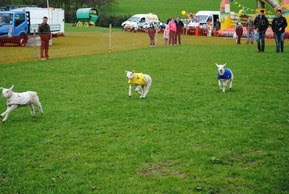 Lots of interesting stuff to see, but it was pretty windswept, and not having prepared properly we were both chilled to the bone! The show's on again tomorrow - and the forecast is significantly better! 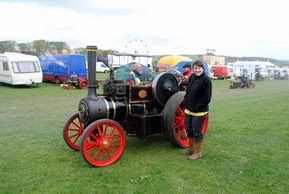