I'm staggered, relieved, and a little disappointed*. Following a catalogue of disasters and the imposition of an interest charge of over £1,000 I finally managed to contact the managing director of Homebase Mr Paul Loft. He has now personally intervened and apologised for the situation that has arisen, and cancelled outright the interest charge.


He has now also offered to replace or refund the damaged oven (see previous blogs) for which I have been charged over £700. What tragic irony that I actually took the ruddy thing to the skips JUST LAST WEEKEND, it having sat in my shed all this time. Still, I'm halfway there, and better to meet halfway than lose out altogether. Many thanks must go to Mr Loft for his intervention - it's always good to know there is a human face at the head of these big organisations.


*UPDATE:
DESPITE the wrecked oven going in the skip, Homebase did agree to replace it. The new oven is now in place, working beautifully!
Posted by James Wilson No comments:

I've just been updating the Masterbrain website (www.masterbrain.co.uk) to reflect the recent changes - notably the unilateral disbanding of the Rolls-Royce Club Committee by Rolls-Royce Leisure management. We are hoping to be able to run the competition again this year, and once again it will be raising money for the Yorkshire Air Ambulance.

What isn't certain however is the venue; we'll be checking out what's on offer, but practically it will need to be in or close to the Craven area. More details on that as we get them, but for the time being keep an eye on the Masterbrain website and this blog.

What we would really like to do is to gauge interest in the event, and to attempt to make an early selection of candidates. The other thing we really want to do is to spread the word to more pubs, clubs, companies and organisations to take part in the Fresh Radio Pub Quiz Challenge, which runs in conjunction with Masterbrain. Giz a hand - spread the word - tell everyone about it!!

Well, those rip-off merchants at Homebase have really excelled themselves this time! You'll perhaps recall that I bought a kitchen from this shonky outfit a year ago, in the dying days of their December sales. I put off delivery until the spring for obvious reasons - I didn't want to be fitting the kitchen in the depths of winter for one. It duly arrived, I took a week off work, and the mrs was promptly rushed into hospital. One thing led to another, and I wasn't able to do the work as planned. Bear in mind there were several thousand bits to this kitchen, including all the appliances, some of which were put into a shed for safe keeping. One of those was the double-oven - still wrapped in its polystyrene protective casing, and to all intents an purposes looking in perfect condition. Because of the way the kitchen went in the oven was virtually the last appliance to be fitted, and to my horror, when I eventually took the outer covering off I discovered the glass in the top oven was smashed and the entire thing squashed, obviously by having been at the bottom of a pile of heavy items. Homebase refused to accept any responsibility and as a consequence I was £700 worse off.

The kitchen was bought with nothing to pay for 12 months, so I simply put the money in the bank and waited for the bill. Each month they sent me a statement which read "payment due £0.00". That's what my last statement read too, so I assumed I had to wait for one that said "£4,000 now due". To my horror, this morning I received the statement, but instead of £4,000 it said over £5,000, as I hadn't paid in full by the end of December! They've added well over £1,000 interest, and say it's my fault because I didn't read the small print. Yet again I find myself having been ripped off by this company, with nothing I can do about it. The kitchen itself, while adequate, is nothing to write home about, and instructions for putting it all together were the worst I've ever seen. Having trawled the Internet I find plenty of horror stories regarding this company, which I believe is linked to Argos, and I can only add my voice to the many saying "Don't deal with them!"

I've just joined a new group on that Facepageyoubook thingy. It's called "I hate people who don't indicate" and I suppose it gives you an opportunity to let off a bit of steam for things that wind you up (in my case, idiots who drive through dense fog with no lights, then hurtle around blinding everyone on a clear day (or night) with their foglights full on and people who don't indicate). Anyway, a couple of friends had joined up, so I thought I would - along, it turns out, with 1,677 others! Not just me that it winds up then! So, having joined the group I thought I really ought to write something on the "wall" - here's my contribution:

"I could have saved the entire British car industry with one very simple idea, saving billions in one fell swoop. Remove from the car's wiring loom all of that very expensive wiring that runs from the steering column to each corner of the car, plus all of that horrendously expensive switch gear on aforementioned steering column. By my reckoning, if you take the shortest route there's probably in the region of 20 metres of cable per car, excluding wing repeater lights. Keeping the figure simple let's say it's a quid a metre, plus if you go to a main dealer maybe an average of £100 for the switchgear. Six lightbulbs no longer required, another quid each. Maybe a couple of hours to install the lights at say £15 an hour; a kilo perhaps of amber plastic (being a product of the petrochemical industry it costs the earth). Now - only one in four drivers appear to have the intelligence to know how to use their indicators, so that means 3/4 don't. Create legislation to make these people buy our special new indicatorless car (27,401,793 drivers outside London who don't indicate) - work out the saving, plus the jobs created, for yourself! I'm a bloody genius!"

Rant over - well, almost; yesterday I drove through to Blackburn in what could best be described as poor visibility - there was a significant amount of fog about. We did a potted survey of cars with no lights or just on sidelights. Around half hadn't bothered at all, and I'm afraid of those very nearly all were female. Hmmm!

Well, we got Christmas and New Year out of the way without any dramas. It was the first New Years Eve since my father died, and our first for many years not spent with him. Instead we spent the evening with our friends John and Carolyn, at their home in Ripon. It was a cold night, with snow on the ground, but after a fantastic meal we decided to walk into the City Centre to bring in the New Year in the Market Place - and we had a lovely night too!  Back home for a glass of Buck's Fizz and then to bed (2am). The following morning, after a superb cooked breakfast, we made our way back home via Pateley Bridge and Stump Cross Caverns. To our surprise Park View Stores were open in Bridgehousegate, where you can find the finest flapjack known to man. We bought 10 (yes, 10!) slices, then drove up to Stump Cross for another breakfast - a tradition we've tried to keep up for the last 10 years or so. Conditions on Greenhow Hill were a bit of a surprise, considering the year before when the entire village was like a winter wonderland - totally frosted over. Yes, there was snow; but Greenhow is usually a world apart from anywhere else, and really there was very little up there. 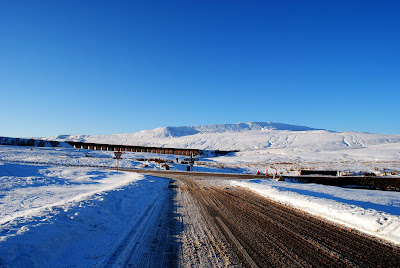 Then of course the snow arrived - and most of the country was paralysed! Julian and I managed to get into work every day during the worst of the weather, and spent most of the Breakfast Show fielding phone calls from schools reporting closures. Snow in the dales of course provides some fantastic photo opportunities, but we decided to head for the Lake District, where we expected to be met with snow-covered mountains and fells. It wasn't to be though - really there was very little on the ground, and we made our way from Penrith down through the lakes and back home via the A65. If only we'd turned right onto the A66 it was blocked just a few miles to the east, with massive drifts! A few days later though we did manage to get some pretty impressive pictures around the Three Peaks, in particular at Ribblehead. 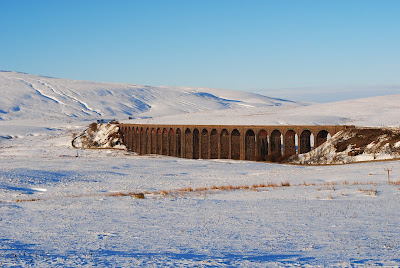 The next thing the weather threw at us was freezing rain, covering the region in deadly sheets of ice. Lancashire County Council had come in for particular criticism due to it's policy of not gritting any side roads, housing estates or anything that wasn't a major through route. But when the ice came they simply had to take action. Before eight in the morning that first day Skipton Police alone reported more than a dozen accidents. Schools closed again because of the danger posed by the ice, and again Julian and I were on our own. Listeners started to play Spot the Gritter, and there were even rumours that gritting teams were being accompanied by police for their own safety. (Not true). Now it's the big thaw, and guess what? Everybody seems to be surprised that river levels have gone up, and there's some flooding! As far as I'm concerned the snow, ice and flooding are inconvenient, but at last we seem to be having a proper winter! Kids have been out on sledges for the first time in decades, having a whale of a time, we've got some fabulous photos, and hopefully next summer we'll have a lot less bugs and nasty stinging insects around. What we probably WILL have though - is a hosepipe ban!