A potted history of Fresh - part 1

The seeds for Yorkshire Dales Radio, subsequently Fresh Am, then finally Fresh Radio, were sown following an unsuccessful campaign to keep Stray FM in Harrogate under local independent ownership. Shareholders eventually received an offer that was simply too good to pass up and the station was taken over by a national group.

Former director Chris Parkin and I then got together with a group of like-minded individuals, and put together proposals for a local licence for Skipton. RSLs – or short Restricted Service Licence broadcasts were run in Pateley Bridge and Skipton, and were very well received, gaining significant listener interest and support. After considerable lobbying the then Radio Authority finally advertised the licence, but for political reasons had tagged on another 2,000 square miles of the Yorkshire Dales. Not only that, the successful licensee would be given technically inferior AM or Medium Wave frequencies instead of the clearer (and stereo) FM. For technical reasons AM is much better when dealing with hills and valleys, making use of ground as well as air waves, whereas FM ideally needs to be line of sight between transmitter and receiver.

After a lot of careful consideration our group decided to apply for the licence, and although we were the only ones who had done any sort of ground work or research in the area, two other groups joined the fray. We held several public meetings to gather support for our proposals, and spent many a long evening at our little office at Harefield Hall in Pateley Bridge writing the application. The day came when the announcement was to be made and we all met at Harefield Hall to await the dreaded phone call from the Radio Authority. We were surprised but delighted when the Authority announced that we had won the licence – and the realisation dawned on us that the real work was only just about to begin. We needed studio and transmission sites, and a lot of equipment.

One major disappointment was when our suppliers came back to us after we won the licence. Most of the vital hi-tech stuff had suddenly increased massively in price, including installation of studios and transmitter masts. Undeterred – and with a lot of technical know-how between us – we set about the installation ourselves. A 145 foot mast was erected at Brunt Acres in Hawes while a smaller 105 foot tower was put up on the grounds of Aireville School in Skipton. We bought portable buildings and had them shipped in from Halifax  to the Craven College Aireville campus – site of our Skipton RSL trial broadcasts. Kitting out the studios for a small local station was incredibly complex, taking into account the capability of split transmissions for the northern and southern parts of the region, the need for a dedicated news booth, and a fully equipped production studio next door to the live on-air facility. Hawes was a little easier as we’d rented an industrial unit on the Brunt Acres estate and simply moved in our mobile studio.

Everything was ready on time for the official launch, on the 4th of May 1997, at the Wensleydale Creamery in Hawes. There was a little panic when one of my fellow directors (from Craven) spent some considerable time driving round the dales trying to pick up our test transmissions – without success. It was a massive worry until we checked his radio and found that he’d been trying to pick us up on 93.6fm instead of 936kHz medium wave!
Posted by James Wilson No comments:

Our best ever location!

Fresh Radio - or Yorkshire Dales Radio as it was originally - has moved three times in its history. We set up by kind permission of Alan Blackwell at Craven College's Aireville Campus, which is where we started broadcasting in 1997. From there we moved to Firth Mills on Firth Street in Skipton, close to Merritt and Fryers, then to the Watermill at Broughton Hall. We moved once in our time at Broughton, from fantastic studios and offices in the Mill to our final resting place in what was known as the Retort House. Alan Watts has very kindly sent me a couple of pictures from our original site, at Craven College. It may look a bit rough and ready, but it worked. We had two good sized studios plus a news booth, and plenty of office space too. There was a fantastic refectory in the college building, and a ready supply of eager media students as well! 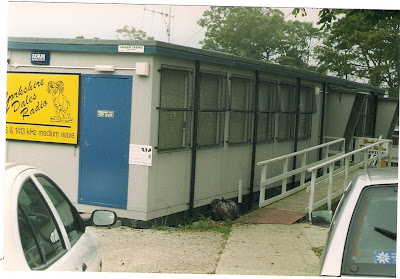 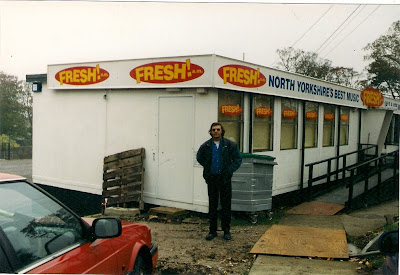 Yorkshire Dales Radio and Fresh - the best and the worst

Nick Bewes: So many amazing times and people at YDR/fresh over the years. I witnessed Glenn doing the Farming news, one of the greatest things I've ever seen! James cooking award winning sausages from Jacksons of Cracoe on the breakfast show, being onair during Foot and Mouth outbreak, the floods, and Christmas mornings bringing everyone together. Presenting breakfast with James, Loz and Matt was great fun. The memories will live on...
Posted by James Wilson No comments:

A sad day for local radio

I've decided to put one of my Facebook posts into my blog, because today is one of the saddest I can remember - Facebook friends, please bear with me:
How incredibly sad to hear Jeremy Gartland sign off for the final time at Fresh. I learnt new information last night about the future for Fresh, contrary to what I'd been led to believe. I now understand that everybody is to go.
I feel sad for everybody, but a couple in particular, one whose family is about to expand. He, like the other person I have in mind is a consummate professional and has youth on his side, so hopefully will find something very soon. Another has been constant since he turned up at Fresh, and again will find something - one of the best presenters I've had the pleasure to work with.
And last but by no means least is Julian. He has put more into Fresh than anyone could possibly imagine, and has kept very quiet about his own circumstances, which have been near impossible to imagine. Julian you're the best - hopefully the "Boys" will be "back in town" some time in the not too distant future.
This is not the end
Posted by James Wilson No comments: