End of an era

Many, many thanks for all the messages of support, both in this morning's Breakfast Show, and in the phone calls and e-mails since. They're VERY much appreciated.
Posted by James Wilson 10 comments:

Well, what a 24 hours that was! Maybe not quite a GLOBAL traveller, but I've had quite a hike. Finished work on Monday afternoon, straight to Leeds-Bradford airport, flew out to Amsterdam, then (after a delay caused by strikes in France) I flew on to Luxembourg. Met at the airport by a driver, who took me to the poshest hotel in Luxembourg! Long, hot bath before a trip down to the bar for a glass of wine before bed - and ONE glass of wine was all it was to be! £5.95 for 15cl, which is around the top end of what I pay for a full bottle!
We had a 7:30 date with our transport, taking us on an hour and a quarter drive to Goodyear's test track and proving ground - one of only two such facilities in the world. New laws coming in in 2012 mean tyre manufacturers will provide much more detail about their products, right down to the amount of sound they give off, but more importantly from a safety point of view the grip and drag. We had lectures on worn tyres, winter tyres, summer tyres, and cheap imports.
Then came the practical bit, on the track. We got to drive powerful BMW's and Mercedes, and even a little Nissan which demonstrated the lethal result of mixing tyres. I did 85 in a BMW as I shot over a police stinger device, which was quite an experience - the car handled perfectly throughout, as Goodyear demonstrated the latest generation of "Drive on Flat" tyres. The amazing thing about them is you can continue to drive at 85, for up to 85 kilometres.
At the end of the day it was another mad dash to Luxembourg airport, quick flight to Amsterdam, 2 hours wait for my connecting flight, then back to Leeds-Bradford to be picked up by James Barrett from the Fresh sales team just after 9pm. Thanks to him and Fiona from Sales who did a great job of making sure I made my flights, and got home again in one piece!
I'm hoping to put together a feature on road and tyre safety using the information I got, together with Fire and Rescue, and traffic police. More on that later, but here's the picture that shows (if you look very closely) the hollow needles left by the stinger. 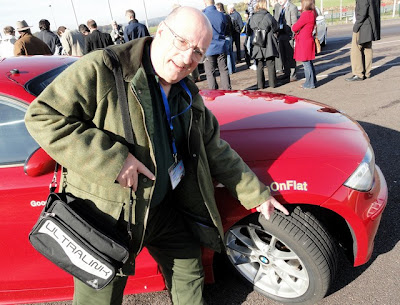 Just what is it with Katie Price? The utter stupidity and arrogance of that woman is beyond belief. Having lied through her teeth in an attempt to get off a charge of driving while using her mobile phone, she's now been caught red-handed again, only a month after her conviction. I'm not a fan of the Daily Mail - I think some of their correspondents/readers are some of the nastiest people you could wish (not) to meet. But today they print evidence that the brain-dead bimbo STILL thinks she's above the law. Follow this link to read the story: http://www.dailymail.co.uk/tvshowbiz/article-1321073/Katie-Price-risks-driving-ban-strikes-photographer-phone-wheel.html
Posted by James Wilson No comments:

Most people were utterly gripped by the amazing pictures sent from across the world as the incredible rescue mission unfolded. From my point of view it was an absolute joy to have some good news to report for once. And it wasn't marred in any way; the whole operation went without a hitch, and all 33 men and their rescuers were brought out of the mine in record time.

The miners were missing, presumed dead for 17 days. Then the newsreel pictures appeared of a face at the bottom of a tiny exploratory hole. Shortly after a note attached to a drill bit confirming that the men were safe in a refuge half a mile down. The bad news? They may be stuck until Christmas as drilling operations commenced. But it was to take only half the expected time to get a shaft drilled down to the men. Next we hear it'll take two days to get them all out, but no; again it takes just half the time. Only the incredibly cynical and heard-hearted could fail to have been moved by the pictures as the men came one-by-one out of the rescue pod.

I was at the Radisson Blu Hotel in Liverpool last night where, in the foyer, dozens of guests sat and stood around a massive screen as the drama unfolded live. On Facebook I read of people in the Dales staying up all night to be sure of seeing the last people come out of the mine. Chile is now firmly on the world map, and for all the right reasons. I was delighted to be able to cover the rescue operation, giving live updates as some of the trapped miners were brought out - it makes you feel incredibly humble!
Posted by James Wilson No comments: